When we are purchasing a projector, what is the difference between choosing the off-axis and the non-off-axis?

In the specification of projector, usually we could see the words "100% off-axis" or "80% off-axis". Then what does this function mean? Do we have to choose the off-axis projectors?

First of all, let's take a look at the definition of off-axis. Off-axis is a function of the projector. This function allows the device to project a complete image on the wall or curtain without being fixed on a table with the bracket. The off-axis is actually a function of DLP display technology from the TEXAS, which solves the problem of projector placement. 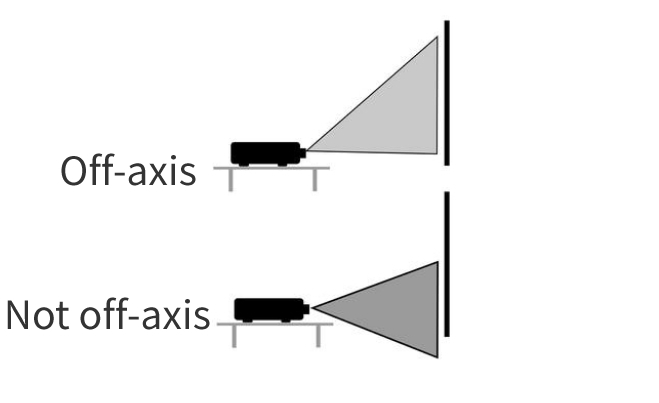 As shown in the figure above, that is the difference between the images projected by the projector with and without the off-axis.

We could see from the figure that when we need to project a complete image on the wall or a curtain, the projector without off-axis needs to be placed near the wall and meanwhile near the edge of the desktop, because it requires that the projected light is not blocked by the desktop. On the contrary, the placement of the projector with the off-axis is relatively free, as long as it is placed on the flat desktop.

Of course, the degree of off-axis of the projector is also differentiated by percentage.